Home » News » The Lancet Series: Worldwide action needed to address hidden crisis of violence against women and girls
Published in: 12/16/2014
WHO 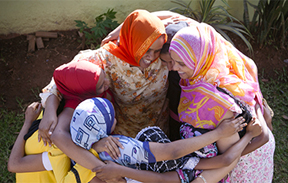 Every day, millions of women and girls worldwide experience violence. This abuse takes many forms, including intimate physical and sexual partner violence, female genital mutilation, child and forced marriage, sex trafficking, and rape. The Lancet Series on Violence against women and girls shows that such abuse is preventable.

Five papers cover the evidence base for interventions, discuss the vital role of the health sector in care and prevention, show the need for men and women to be involved in effective programmes, provide practical lessons from experience in countries, and present a call for action with five key recommendations and indicators to track progress:

Current efforts to prevent violence against women and girls are inadequate, according to the The Lancet. Estimates suggest that globally, 1 in 3 women has experienced either physical or sexual violence from their partner, and that 7% of women will experience sexual assault by a non-partner at some point in their lives.

Yet, despite increased global attention to violence perpetrated against women and girls, and recent advances in knowledge about how to tackle these abuses, levels of violence against women – including intimate partner violence, rape, female genital mutilation, trafficking, and forced marriages – remain unacceptably high, with serious consequences for victims’ physical and mental health. Conflict and other humanitarian crises may exacerbate ongoing violence.

Although many countries have made substantial progress towards criminalising violence against women and promoting gender equality, the Series authors argue that governments and donors need to commit sufficient financial resources to ensure their verbal commitments translate into real change. Even where laws are progressive, many women and girls still suffer discrimination, experience violence, and lack access to vital health and legal services.

Action needed on causes of violence

Importantly, reviewing the latest evidence, the authors show that not enough is being done to prevent violence against women and girls from occurring in the first place. Although resources have grown to support women and girls in the aftermath of violence (e.g., access to justice and emergency care), research suggests that actions to tackle gender inequity and other root causes of violence are needed to prevent all forms of abuse, and thereby reduce violence overall.

"Globally, 1 in 3 women will experience intimate partner and/or sexual violence by non-partners in their lifetime, which shows that more investment needs to be made in prevention. We definitely need to strengthen services for women experiencing violence, but to make a real difference in the lives of women and girls, we must work towards achieving gender equality and preventing violence before it even starts," explains Series co-lead Professor Charlotte Watts, founding Director of the Gender Violence and Health Centre at the London School of Hygiene & Tropical Medicine, London, UK. "No magic wand will eliminate violence against women and girls. But evidence tells us that changes in attitudes and behaviours are possible, and can be achieved within less than a generation."

Ultimately, say the authors, working with both the perpetrators of violence (men and boys) and women and girls will be essential to achieve lasting change, by transforming deeply entrenched societal norms on gender relations and the insidious belief that women are inferior.

Violence is often seen as a social and criminal justice problem, and not as a clinical or public health issue, but the health system has a crucial part to play both in treating the consequences of violence, and in preventing it.

"Health-care providers are often the first point of contact for women and girls experiencing violence," says Series co-lead Dr Claudia Garcia-Moreno, a physician at WHO, Geneva, who coordinates research and policy on violence against women.

"Early identification of women and children subjected to violence and a supportive and effective response can improve women’s lives and wellbeing, and help them to access vital services. Health-care providers can send a powerful message – that violence is not only a social problem, but a dangerous, unhealthy, and harmful practice – and they can champion prevention efforts in the community. The health community is missing important opportunities to integrate violence programming meaningfully into public health initiatives on HIV/AIDS, adolescent health, maternal health, and mental health."

Second, they must change discriminatory structures (laws, policies, institutions) that perpetuate inequality between women and men and foster violence.

Third, they must invest in promoting equality, non-violent behaviours and non-stigmatising support for survivors.

Finally, they must support research and programming to learn what interventions are effective and how to turn evidence into action.

According to Series co-ordinator, Dr Cathy Zimmerman, from the London School of Hygiene & Tropical Medicine, UK, “We now have some promising findings to show what works to prevent violence. Our upcoming challenge is to expand this evidence on prevention and support responses to many more settings and forms of violence. Most importantly, we urgently need to turn this evidence into genuine action so that women and girls can live violence-free lives.”

In a comment accompanying the Series, former US President Jimmy Carter, founder of The Carter Center says, ”It is my hope that political and religious leaders will step forward and use their influence to communicate clearly that violence against women and girls must stop, that we are failing our societies, and that the time for leadership is now.”