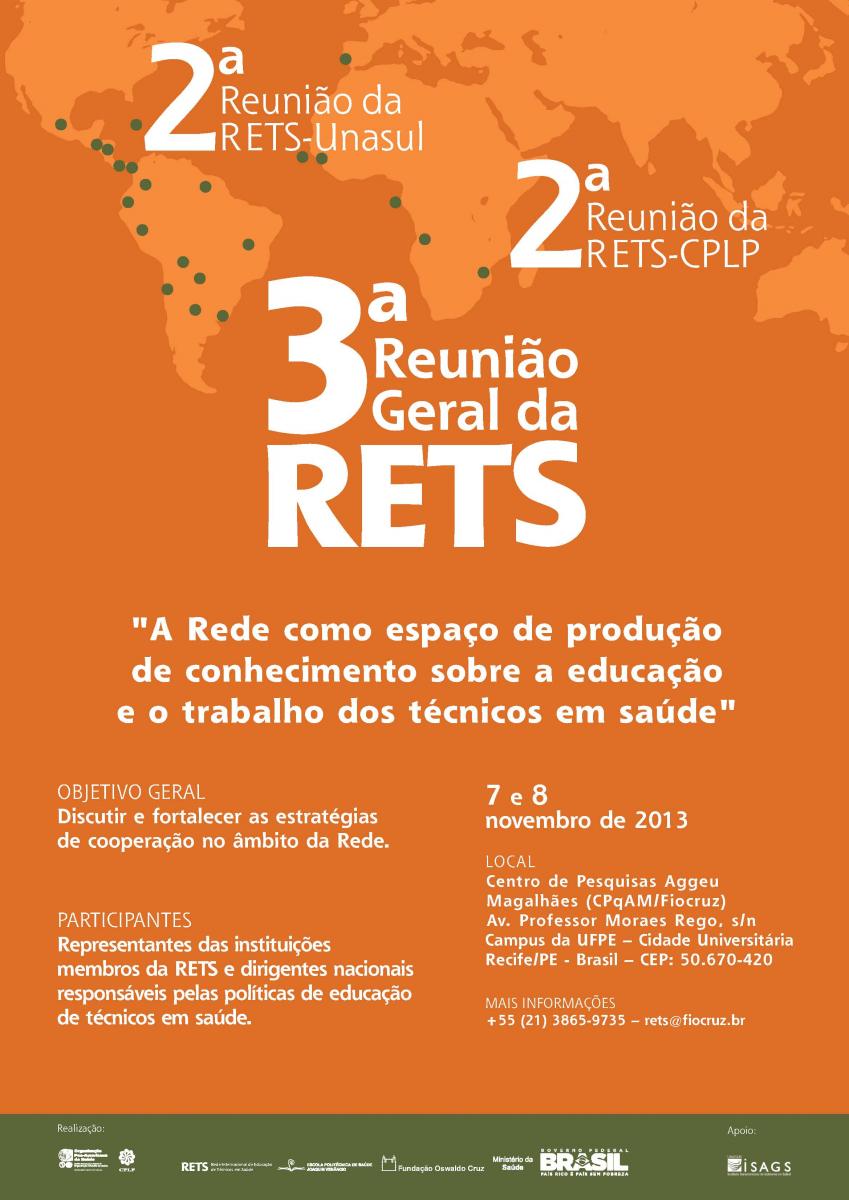 The 3rdGeneral Meeting of RETS will be held on November 7th and 8th, at AggeuMagalhãesResearch Center (CPqAM/Fiocruz), in Recife (Brazil), along with the 2nd Meeting of RETS-CPLP and the 2nd Meeting of RETS-Unasur. The idea is that the meeting, which theme is The Network as a place of production of knowledge on education and work of health technicians,serves as a space for discussion about possible strategies to strengthen the initiative, created in 1996. In addition, are goals of the meeting: the construction of the Work Plan of the Network and its sub networks for the coming years and the review/elaboration of the Regulations of RETS and its sub networks.There is also predicted the official release of the new site of RETS. Soon will be disclosed the event´s program, which includes open activities to the general public.

The Pan American Health Organization (PAHO/WHO), the Community of Portuguese Language Speaking Countries (CPLP) and the Joaquim Venâncio Polytechnic School of Health (EPSJV/Fiocruz/Ministry of Health of Brazil) – with support from the South American Institute of Government in Health (ISAGS), Unasur Institute – are organizing the encounter. The reason for the holding of the meeting in Recife is due to the 3rd Global Forum on Human Resources for Health, also held in that city, from November 10th to 13th. The Executive Secretariat of RETS will seek to take matters discussed at the meeting to the Forum; which makes possible to integrate guidelines of the Network to broader discussion on Human Resources for Health: foundation for universal coverage in health and its post 2015 development agenda, theme of the 3rd Forum.

What can we do to resume the Network´s origins? How can we make our work more effective? How can we give visibility to these workers that represent the basis of National Health Systems and many times are ignored by the authorities and policy makers of the sector? What can we do to overcome the great challenges related to networking, like the dispersion of its knots and contact issues?These are some of the questions that the Meeting, which preparations are just beginning, will try to answer. For this purpose, however, it is necessary that all members participate in the preliminary discussions and give suggestions to enrich the presence meeting.

The 3rd Meeting is focused to representatives of member institutions of RETS and national leaders responsible for educational policies of health technicians.Besides an excellent opportunity for members to meet, the event is a privileged moment to reassess the work done in the last four years and to discuss strategies for continuing and even strengthening the initiative, which history begun in Mexico, in 1996.

For the organization of the event to be performed more efficiently – sending invitations and draft documents to be analyzed by the members, among other things –, the Executive Secretariat of RETS, which is based at JoaquimVenâncio Polytechnic School of Health (EPSJV/Fiocruz), requests that the institutions members of the network fill out the form or keep contact by email rets@fiocruz.br to update their registration information. News on the Meeting will be available at http://www.rets.epsjv.fiocruz.br.

RETS was created as an answer to the result of a great study on the education of health technicians in the Americas, coordinated by the Pan-American Health Organization (PAHO/WHO). The intention was that the network worked as a space for the production and dissemination of knowledge that could guide and provide more solid basis for the development of public policies for the education and work of health technicians.