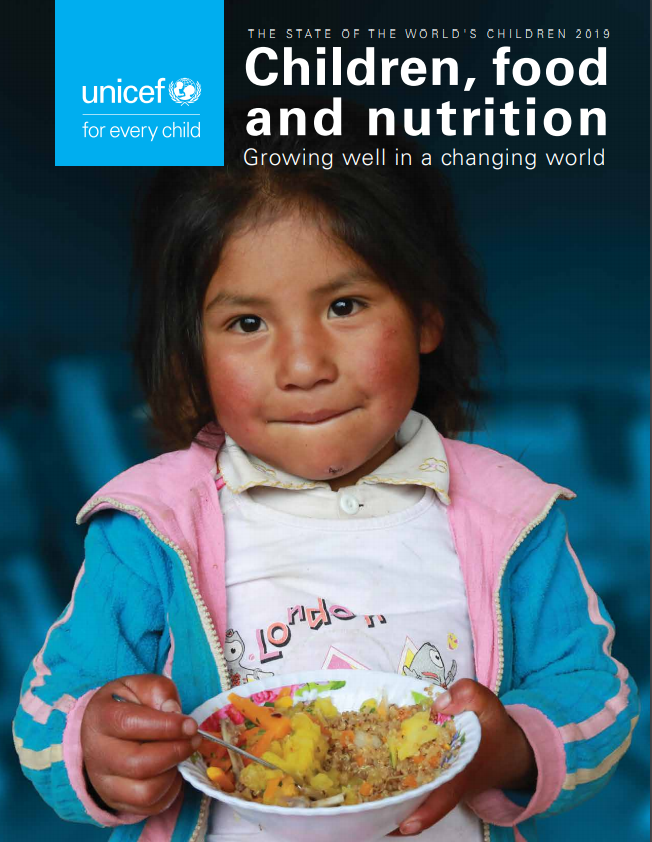 “An alarmingly high number of children are suffering the consequences of poor diets and a food system that is failing them,” the UN children’s agency (UNICEF) warned. According the report 'The State of the World’s Children 2019 - Children, food and nutrition: Growing well in a changing world', around 200 million children under-five are either undernourished or overweight, while one-in-three globally - and almost two-thirds of children between the fragile ages of six months to two years - are not fed food that nurtures proper development.

Despite growing technological advances to address health and nutrition, the world has lost sight of “the most basic fact: If children eat poorly, they live poorly”, the agency’s Executive Director, Henrietta Fore said, explaining that millions of children are not living on healthy diets “because they simply do not have a better choice.”

“It is not just about getting children enough to eat; it is above all about getting them the right food to eat. That is our common challenge today”, she urged.

The problem of ‘hidden hunger’

The flagship report describes the “triple burden” of malnutrition: Undernutrition, overweight, and deficiencies in essential nutrients. While 149 million youngsters under-five have stunted growth, 50 million are too thin for their height - common signs of undernutrition.

Another 40 million in the same age bracket are overweight or obese, and at the same time, half of all children under five worldwide are not getting essential vitamins and nutrients, an issue UNICEF has dubbed “hidden hunger”.

Poor diets are being introduced at the onset of life, which prove particularly detrimental in the crucial first 1,000 days. Though breastfeeding is shown to be lifesaving, only 42 per cent of children under-six months of age are exclusively breastfed, with a growing reliance on infant formula, the report warns.

Milk substitute sales rose by 72 per cent between 2008 and 2013 in upper middle-income countries including Brazil, China and Turkey.

Breastfeeding has demonstrated it can supply a range of benefits, including lowering the likelihood of infant mortality, being overweight and obesity; and improving school performance.

As children reach school age, they are routinely exposed to unhealthy, ultra-processed foods, with some 42 per cent of adolescents in low- and middle-income countries consuming a sugary soft drink at least once daily, and 46 per cent eating fast food at least once a week. In high-income countries, the figures jump to 62 and 49 per cent, respectively.

The result in a young population globally which is chronically overweight, which has increased across every continent. From 2000–2016, the proportion of overweight children aged five to 19 years, rose from one-in-10, to almost one-in-five.

The lack of healthy food perpetuates families’ poverty status across generations, with the challenges posed by environmental changes worsening the problem.

Twenty years on from the last State of the World’s Children report in 1999, the “changing world” in which we live has led to major shifts, UNICEF explains.

More families have abandoned the countryside to become city dwellers, more women have joined the workforce, while also balancing motherhood, and with the crisis of climate change, biodiversity, water, air quality and soil have all been degraded.

UNICEF has laid out recommendations for nutritious, safe and affordable diets for children across the world:

The agency’s “systems approach” highlights the role of food, health, water and sanitation, social protection and education, in better feeding the world’s youngsters.

In practice, this could mean implementing “sugar taxes” - a rise in the cost of sugary foods to the consumer, as Malaysia has done recently, in response to rising obesity.

The placement of nutritional information can play a vital role as well, with evidence building that well-designed nutritional labels can positively affect consumer choice, regardless of being rich or poor; an incentive for manufacturers to create healthier products.

Overall, the effort to address faults in the food system must involve governments, the private sector and civil society, Ms. Fore highlighted.  “We are losing ground in the fight for healthy diets'', she said. “This is not a battle we can win on our own.”

Interactive web feature - “The changing face of malnutrition”
The State of the World’s Children 2019 - Children, food and nutrition: Growing well in a changing world