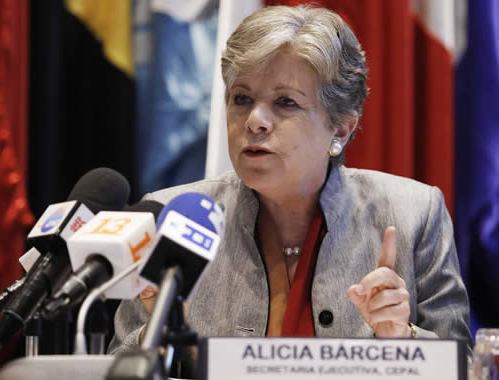 “For nearly a decade, the Economic Commission for Latin America and the Caribbean (ECLAC) has positioned equality as the basis of development. Today we confirm once again the urgency of moving ahead on the construction of Welfare States, based on rights and on equality, which provide male and female citizens alike access to comprehensive and universal social protection systems and to essential public goods, such as quality health and education, housing and transportation. The call is being made to forge social compacts for equality,” Alicia Bárcena, the regional organization’s Executive Secretary, said yesterday (28/11) at the launch of the Social Panorama of Latin America 2019 report (in Spanish).

A decrease in income inequality is key to resuming the path of poverty reduction and achieving the targets established in the 2030 Agenda’s Sustainable Development Goal 1. “It is necessary to grow to equalize, and equalize to grow. Overcoming poverty in the region not only requires economic growth; it must be accompanied by redistributive policies and active fiscal policies,” ECLAC states in the study presented at a press conference today in Santiago, Chile.

The document emphasizes the growth of middle-income strata, although they continue to experience numerous shortfalls and vulnerabilities, both in relation to their income as well as in terms of exercising their rights, the Commission warns. Between 2002 and 2017, the share of low-income strata as a proportion of the total population fell from 70.9% to 55.9% (a percentage that includes people in situations of extreme poverty and poverty and in non-poor low strata). At the same time, the share of middle-income strata (divided into lower-middle, intermediate-middle, and upper-middle) grew from 26.9% to 41.1%. Thus, 76.8% of Latin America’s population belongs to low-income or lower-middle-income strata, ECLAC underscores. Finally, the people belonging to high-income strata rose from 2.2% to 3.0% of the total.

Of the total adult population belonging to middle-income strata, more than half had not finished their secondary studies as of 2017; 36.6% had occupations with a high risk of informality and precariousness (non-professional self-employed workers, non-professional salaried workers in microbusinesses and in the domestic service industry); and only half of all economically active people were affiliated with or contributed to a pension system. The main recipient of labor income in these strata receives $664 dollars a month on average, while in low strata this income falls to $256 dollars. In this way, the report shows that a high proportion of the middle-income population experiences significant deficits in terms of social and labor inclusion and a high degree of vulnerability to falling back into poverty due to changes prompted by unemployment, a decline in their income, or other catastrophic events such as grave illness or disaster.

Continuing the upward trend that has been recorded since 2015 in Latin America, 30.1% of the region’s population was below the poverty line in 2018, while 10.7% lived in situations of extreme poverty – rates which are seen rising to 30.8% and 11.5%, respectively, in 2019, according to ECLAC’s projections.

This means that approximately 185 million people were below the poverty threshold in 2018, of whom 66 million people experienced extreme poverty, according to the Social Panorama of Latin America 2019. In 2019, the number of people in poverty is seen rising to 191 million, of whom 72 million are forecast to be living in extreme poverty. Within that evolution, it is worth noting that practically all the people who were included this year in the poverty statistics were classified straight away as being in extreme poverty.

The 2.3 percentage point increase in poverty between 2014 and 2018, based on the regional average, is basically due to the increase seen in Brazil and Venezuela. In the rest of the countries, the predominant trend in that same period was towards a reduction, mainly because of an increase in the labor income of households with the fewest resources, but also due to public transfers from social protection systems and private transfers, such as remittances in some countries. Poverty mainly affects children and adolescents, women, indigenous and Afro-descendant people, residents of rural areas, and those who are unemployed.

ECLAC’s study also indicates that inequality in income distribution – expressed in the Gini index, based on household surveys – has continued to trend downwards (on average it fell from 0.538 in 2002 to 0.465 in 2018 in 15 countries), but at a slower pace than in previous years: while between 2002 and 2014 it dropped by 1.0% a year, between 2014 and 2018 the decline was 0.6% per year. However, if the Gini index is corrected utilizing other sources of information, which are better able to capture the income of the wealthiest 1%, it can be seen that inequality is higher and the downward trend is attenuated when compared with the estimate made on the basis of household surveys alone.

For example, in Brazil in 2014, the share of the wealthiest 1% of the population in the country’s overall income was 9.1% according to household surveys, but this percentage rose to 27.5% when tax information was taken into account. In Chile (based on data from 2015), the share of the wealthiest 1% in total income, also measured by household surveys, was 7.5%, with that proportion increasing to 22.6% based on information from tax records and to 26.5% in the case of net wealth (financial and non-financial assets minus liabilities). Meanwhile, in Uruguay (based on data from 2014), the proportions also rise: 7.3% (with household surveys), 14% (tax information) and 17.5% (net wealth).

In another vein, the Social Panorama of Latin America 2019 indicates that social spending by central governments rose from 10.3% to 11.3% of GDP between 2011 and 2018, reaching 52.5% of total public spending. South America has the highest social public spending average in the region (13.2% in 2018), while in Central America, Mexico and the Dominican Republic, that figure is 9.1%. In the Caribbean, average social spending versus GDP is higher (12.2%), but in 2018 it returned to 2014 levels, with a weight equivalent to 43.2% of total public spending. The study warns that it is precisely those countries with the lowest levels of social spending that face the greatest challenges to achieving the 2030 Agenda’s targets.

Finally, the document calls for addressing the structural causes of migration and for strengthening multilateral cooperation to ensure the social protection and social and labor inclusion of migrant persons in all stages of the migratory cycle. Between 2010 and 2019, the number of migrants in Latin America and the Caribbean rose from 30 million to 40.5 million, which is equivalent to 15% of the total migrant population worldwide. And between 2000 and 2019, the proportion of intraregional migrants increased from 57% to 70% of the total.

Remittances play an important role in alleviating poverty in several countries, the document sustains. In El Salvador, Guatemala, Honduras and the Dominican Republic, the incidence of poverty among the total population would be between 1.5 and 2.4 percentage points higher if it were not for these money transfers.

In the report, ECLAC emphasizes that policies for social and labor inclusion are needed to eradicate poverty and reduce inequality and the vulnerability of low- and middle-income strata. This also requires a labor market that guarantees quality employment and decent pay, eliminating women’s barriers to labor insertion, and strengthening the development of comprehensive and universal social protection systems in the framework of Welfare States centered on rights and equality.

ECLAC: The Region Has Underestimated Inequality