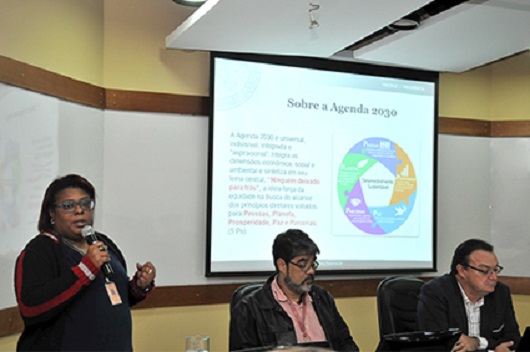 According to PAHO data, over 34% of the population in Latin America and the Caribbean does not have safe managed drinking water, and only 22% have sewage services. It is estimated that about 7,600 children under the age of 5 will die annually for diarrheal diseases in the region. It is estimated that at each R $ 1 expense in sanitation, R $ 4 sejam saved in health. This issues are part of the Objectives of Sustainable Development (SDG) 3 and 6, that will be the focus of a Fiocruz event next year. For this, the National School of Public Health Sérgio Arouca (ENSP/ Fiocruz) promoted a debate about the organization of the National Seminary of Health, Health and Human Directorates in the 2030 Agenda, last tuesday (20/8), with the presence of representatives from various national and international institutions and organizations of the governorate.

In the ocasion, it were discussed the 2030 Agenda, the water and sanitation situation in Latin America and the actions of the institutions present on the topic. Representatives of the Vice Presidency of Environment, Health Care and Promotion (VPAAPS/Fiocruz), Fiocruz's Agenda 2030 Strategy (EFA2030), Sérgio Arouca National School of Public Health (Ensp/Fiocruz), Polytechnic School of Joaquim Venâncio (EPSJV/Fiocruz), The Institute of Applied Economic Research (Ipea), from the Brazilian Institute of Geography and Statistics (IBGE), from the Ministry of Health, from the Public Prosecution Service of Rio de Janeiro (MP-RJ), from the Association Of Municipal Sanitation Services (Assamae), National Council of Municipal Health Secretariats (Conasems), Articulation of the Semiarid (ASA Brazil), National Sanitation Secretariat of the Ministry of Regional Development (SNS-MDR), Secretariat Environment and Sustainability (Seas) and the Civil Society Task Force for Agenda 2030.

“The idea for this event came from an invitation from PAHO to discuss SDG 6 indicators that relate directly to health”, explains Gabriela Lobato, assistant coordinator for VPAAPS/Fiocruz. Health Management analyst and EFA2030 representative Claudia Martins presented the Foundation's efforts and initiatives around the goals agreed upon by UN member countries, especially with regard to health. “Health is the great success parameter of the Agenda, as sustainable development needs to be focused on people's well-being”, he said. She also drew attention to the challenge posed by the global economic crisis in meeting the ambitious goals of the Agenda.

Health facilities also suffer from a lack of adequate water and sewage services. Available data from 16 countries show that 30% of healthcare services do not have access to improved water facilities that meet certain technology standards and service levels. For Teófilo Monteiro, a PAHO researcher, this sets a critical situation for the region. He adds that Sustainable Development Goal 6 proposes a new approach to the unfinished goal of Millennium Development Goals goal 7C, UN Agenda by 2015. In Agenda 2030, the issue of universal access and ending inequalities is addressed. In addition, new parameters are introduced to consider the service delivered safely and properly. According to Monteiro, so far there has not been an update of national sanitation plans to include the new nomenclature and its parameters.

Fiocruz Minas researcher Rodrigo Carvalho participated in the preparation of PAHO's new report on sanitation in Latin America and the Caribbean, which will be released shortly. Carvalho points out that the report advances by clarifying the perspective of human rights and considering in its methodology the analysis of inequalities and the dimension of financial accessibility, under the theme of universal and equitable access. The researcher points out that in the region the inequality between countries and within countries is still huge.

In Brazil, we have major challenges in the area. Only 83% of the population has access to treated water, while 52% has access to sewage collection, of which only 75% is treated, according to data presented by Assemae's representative, Silvia de Oliveira. Brazil is today the 5th largest solid waste generator in the world. Interregional inequalities are also large. While in the Southeast only 17% of the population has no access to sewage collection, in the North this number reaches 90%. Water reserves are also not evenly distributed, with large water reservoirs concentrated in the North and Midwest.

“It is necessary for people to understand that the lack of sanitation impacts in several areas, such as health, economy, productivity, environment, tourism and even the real estate appreciation of a region”, defended Silvia, drawing attention to the need for more investments in the area. Following this first preparatory event, an interinstitutional commission is to be set up to organize the seminar, to be held on the week of World Water Day in March 2020.