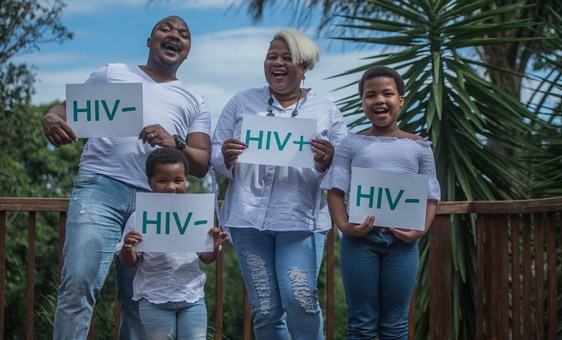 During her opening speech for the 10th IAS Conference on HIV Science (IAS 2019), organized by the International AIDS Society from the 21 to 24 July in Mexico City, the Director of the Pan American Health Organization (PAHO) and Regional Director for the Americas of the World Health Organization (WHO), Carissa F. Etienne, highlighted that scientific innovation has led to significant progress against HIV/AIDS, but emphasized that the AIDS response must be rethought in order to end the epidemic. "Science has guided innovation towards an unprecedented progress in responding to a communicable disease that, until recently, represented a threat to the lives of many people,” said Etienne. However, the world is not on track to achieve the target of eliminating AIDS as a public health threat by 2030.

During her speech she recognized that the development and implementation of solid approaches based on public health, human rights and evidence, have enabled the course of the epidemic to be reversed in many countries.

“Building on our past successes, it is time to rethink our response to ensure that we reach our HIV targets,” she said, adding that “the path to ending AIDS runs through ensuring universal health access and coverage.”

According to Etienne, the sustainable development agenda and the renewed global commitment to universal health coverage, are opportunities to ensure financing and sustainability for the HIV response, as well as the expansion and integration of prevention, testing and treatment with other health services.

“It is time for HIV prevention, testing and antiretroviral services to be fully available alongside TB, STI, viral hepatitis, sexual and reproductive health, and non-communicable disease services at the first level of care, where the needs of affected communities can be best attended,” she said.

For Etienne, this focus on integrated services has been promoted by PAHO in the Americas and has led to the dual elimination of mother-to-child transmission of HIV and syphilis in various countries of the Region, through the provision of comprehensive maternal and child health services at the first level of care.

The PAHO Director believes that more research is needed so that innovation can continue to improve the effectiveness of prevention methods, treatment plans, the development of new laboratory tools and the use of integrated platforms for diagnosis and monitoring.

Etienne also added that more data and evidence is needed to provide cost-effective, friendly services that refine the struggle against stigma and discrimination in health services, and to continue exploring new sustainable finance mechanisms.

After recognizing the contributions of the LGBTI community and highlighting that the “leaving no one behind” principle of HIV activism has now become a central axis of the global development agenda, Etienne reviewed the latest data on the epidemic. According to UNAIDS, detection and treatment programs in several regions of the world are not on the right track, and the gaps tend to be greater among populations most at risk of infection, as well as young people and children.

New HIV infections have increased in Eastern Europe and Central Asia (+29%), the Middle East and North Africa (+10%), and in Latin America (+7%). Key populations (men that have sex with men, trans and sex workers) and their sexual partners, now account for up to 54% of new infections worldwide. However, the range of prevention methods that, when combined, can avoid infection, reach less than 50%.

“Science and innovation must find solutions to both long-standing and new challenges. New knowledge and guidance will only achieve impact if there are strong national programs and community systems to implement them in countries,” she said.

The PAHO Director highlighted that “science, evidence and innovation must continue to guide HIV policies, programs and investments,” calling for partners to intensify and accelerate action to end AIDS by 2030.

In addition to Etienne, Anton Pozniak, President of the IAS; Brenda Crabtree-Ramirez, President of the IAS in Mexico; Luis Adrian Quiroz, from the National Movement for the fight against AIDS in Mexico; Alejandro Brito, Founder and Director of the Mexican organization, Letra S; Jorge Alcocer Varela, Secretary of Health of Mexico, spoke at the opening ceremony, as did the United Nations High Commissioner for Human Rights, Michelle Bachelet through video message.

The IAS 2019 takes place for the fourth time in the Region of the Americas since its creation in 2001. It brings together more than 6000 scientists, clinicians, public health experts and community leaders from around the world to examine the latest research developments in HIV and to explore how to realistically implement that knowledge to address the epidemic.