Home » News » Mental health will be the subject of the upcoming international workshop on the training and work of health technicians
Published in: 09/01/2022 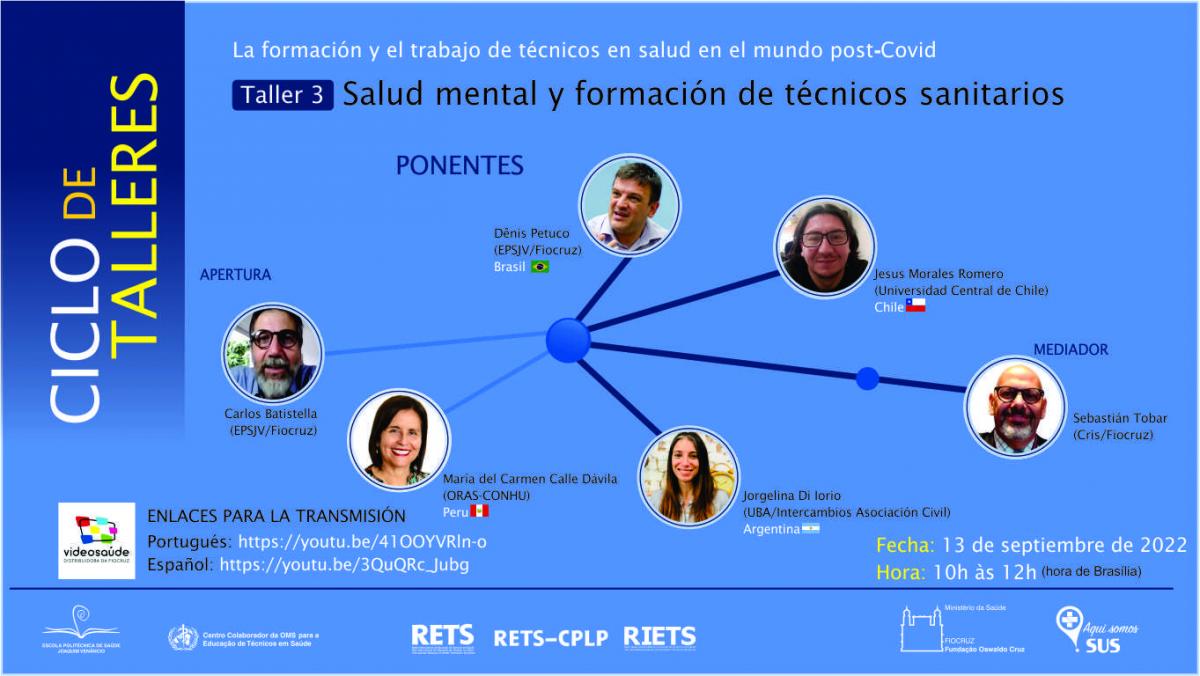 The upcoming event of the Cycle of Workshops The training and work of health technicians in the post-Covid world will be held on Tuesday, September 13, at 10 a.m. (Brasilia) and will deal with mental health. The current executive secretary of the Andean Health Organization - Hipólito Unanue Agreement (Oras-Conhu), María del Carmen Calle Dávila, will open the event, whose speakers will be: Dênis Petuco (EPSJV/Fiocruz - Brazil), Jesus Morales Romero (Universidad Central de Chile) and Jorgelina Diorio (Universidad de Buenos Aires and Intercambios Asociación Civil - Argentina). The workshop will be transmitted in Portuguese and Spanish. A certificate of participation will be sent to those who wish to attend.

The coordinator of International Cooperation of the EPSJV/Fiocruz, Carlos Eduardo Batistella, will present the event and the debate will be mediated by Sebastián Tobar, advisor of the Center for International Relations in Health of Fiocruz.

The Covid-19 pandemic left a trail of more than 500 million infected and more than six million dead, generating the greatest economic, health, and social crisis of our time. In national health systems, the pandemic also left large scars and many challenges that must be overcome as soon as possible.

In this scenario, Primary Health Care (PHC) has been considered strategic to respond to the expanded health demands and needs of the population and the issue of mental health has been considered a priority by all international organizations operating in the sector.

According to the World Health Organization (WHO), in 2019, nearly one billion people - including 14% of the world's adolescents - are living with a mental disorder. Suicide was the cause of more than one in every 100 deaths and 58% of suicides occurred before the age of 50. (...) Childhood sexual abuse and bullying are major causes of depression. Social and economic inequalities, public health emergencies, war, and the climate crisis are some of the global structural threats to mental health. Depression and anxiety increased by more than 25% in the first year of the pandemic alone.

According to the recently revised Comprehensive Mental Health Action Plan 2013-2030, signed by WHO's 194 member states, despite progress over the past decade, most of the scarce public spending on mental health still goes to stand-alone psychiatric hospitals, rather than to community mental health services. For decades, mental health has been one of the most neglected areas of public health, receiving a minimal share of the attention and resources it needs and deserves.

About the workshop cycle

The purpose of the events, which are supported by the PAHO/WHO Subregional Program for South America and the Center for International Health Relations of the Oswaldo Cruz Foundation (Cris/Fiocruz), is to create a privileged space for exchange, reflection, learning and formulation of proposals on the concrete experiences of how different health technician training institutions face their challenges and seek to improve their performance. The workshops are transmitted via YouTube, in Portuguese and Spanish, by VideoSaúde Distribuidora de Fiocruz.