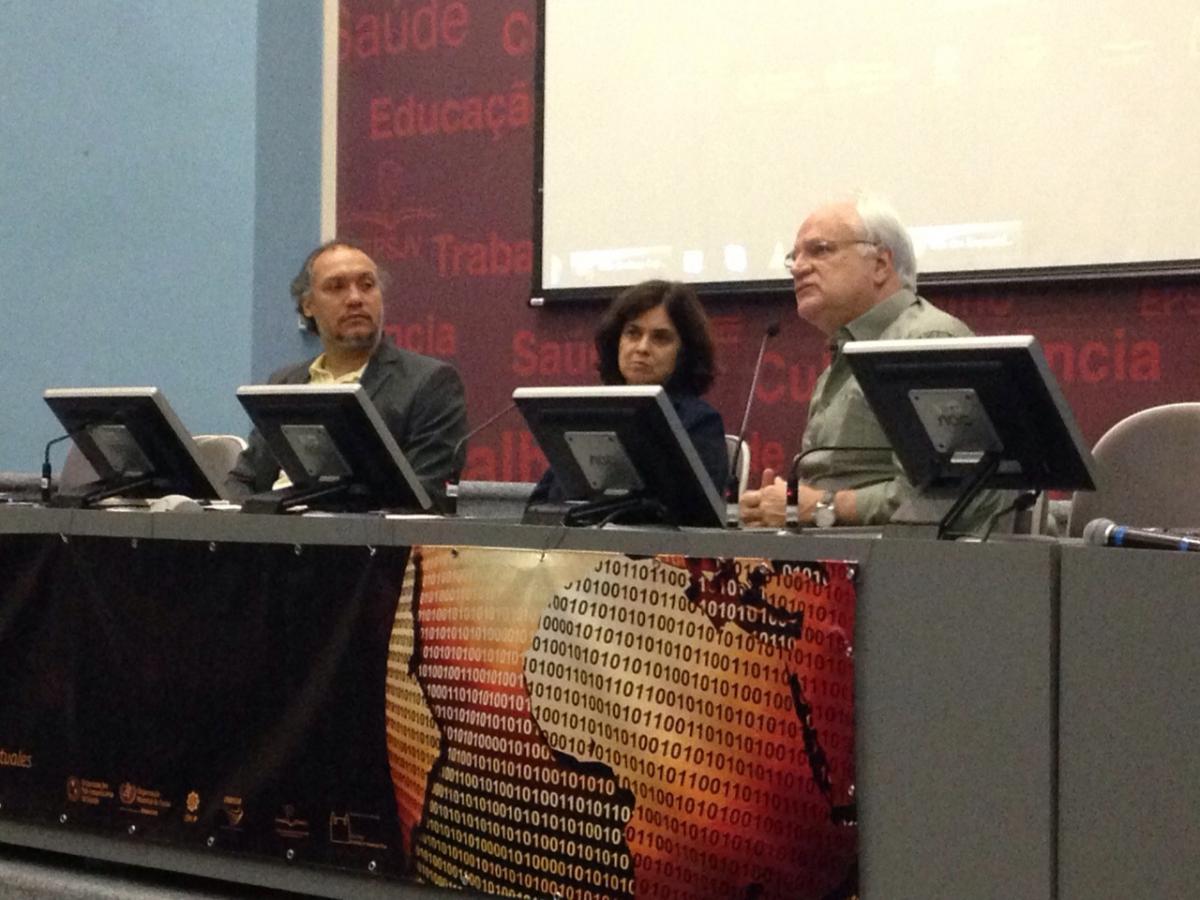 “The goal today is to strengthen the Structural Networks and thus the health systems of partner countries to reinforce the role of workers in the construction of universal systems geared for primary care. We also seek to bring some of the experience of the Brazilian government and this institution in education and management in health.” Those were the words of Joaquim Venâncio Health Polytechnic School (EPSJV/Fiocruz) Director Paulo César de Castro Ribeiro during the opening of the 1st Virtual Seminar of the RETS on the “Intercultural perspective in the Education of Health Technicians”, held on May 20 at the EPSJV, current Executive Secretariat of the Network. The Debate Forum of this Seminar is now open.

With about 130 registrations – health professionals mostly – in more than 10 countries, the event paved the way to a series of seminars to be held throughout the year. The opening session also included the Fiocruz Centre for International Relations Coordinator Paulo Buss, and Education, Information and Communication Vice-President Nísia Trindade.

EPSJV Director thanked the Oswaldo Cruz Foundation (Fiocruz) Education, Information and Communication Vice President, which provided the virtual windows which allowed the event and took the opportunity to reiterate the possibility of broadcasting more seminars with the support of the Fiocruz Presidency. Paulo César also thanked the partners of this initiative – the World Health Organization (WHO), the Pan American Health Organization (PAHO), the South American Institute of Government in Health (ISAGS), the Community of Portuguese Speaking Countries (CPLP) and Fiocruz.

In turn, Paulo Buss said networking is extremely important: “It seeks to help institutions through what we call structural cooperation. In addition to the Health Ministry and other structures within governments, networks assist in creating support to the training of human resources and producing evidence to qualify these professionals”.

Buss also highlighted the success of RETS, which makes him very proud. “It is exciting to see how the movement in the RETS is alive and increasingly gaining importance in the training of health professionals and political construction of our health systems professionals. Importantly, we should not forget the solidarity between our countries and in these schools, because the richness of networks lies in this wealth of exchange, the learning partnership and dissemination of good experiences”, Buss said and completed his speech with a note on the relevance of the technical worker. “In Brazil and in many countries of the Americas and Africa, the core rests on the technicians. They are the ones closest to the population, present in all dimensions of health systems. Therefore, much of the success of health policies lies in those professionals who are well-prepared, with a good political, ideological and technical education.”

Representing Fiocruz President Paulo Gadelha, Nísia also reiterated the role of networks, she said, are an important space for exchange of experiences and formulation of policies based on the concept of structural cooperation. The Vice President said that the fundamental condition to perform quality work in a network, especially internationally, it is to improve distance communication mechanisms.

“This work is our commitment. We know that we need to develop further, and I think this is a fundamental issue for all schools that make up this important training network, exchange and discussion of guidelines”, Nísia said. 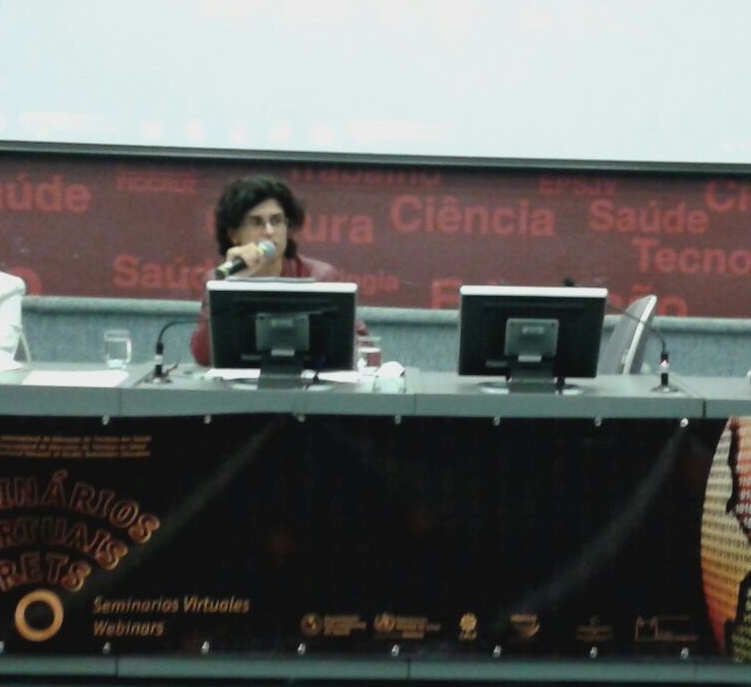 With most of the reflections formulated from work experiences, study and militancy in indigenous health, professor researcher Ana Lúcia started the seminar by highlighting the importance of debate on the emblematic topic.

“In Brazil, indigenous peoples account for 0.4% of the population but contribute significantly to the socio-cultural diversity of our society. We have 274 languages and 305 ethnic groups, according to the 2010 Census”, said the researcher, who seized the opportunity to compare the terms “interculturality” and “intertextuality”: “When I make this small digression, I propose that the exercise of interculturality is also one of intertextuality, our ability to recognize, seek and develop further the speeches echoing in the relations between different people.”

What are the conditions that enable interculturality? How do we interpret the underlying discourse in this intercultural relationship in health? Do we know well enough socio-cultural organization structures of the people we serve? Does the incorporation of an indigenous inhabitant in health teams, for example, guarantee interculturality of health actions in the services? These were some of the issues raised by the researcher throughout her speech.

Ana Lúcia says that if we analyze the dimensions in the Brazilian health systems and in other countries, as well as in indigenous health subsystems, we see that interculturality in health is still a major challenge. The researcher notes that this is where the importance of technical training and its potential in interculturality in health lies. “We are making a critical analysis on the health sector, and we have identified that local and traditional practices and knowledge are peripheral and undervalued. There is little flexibility to include different health practices and knowledge in the dynamic, routine and flows of health services. Thus, interculturality should be actively built, and I can identify that this space may be in technical training. If I believe that interculturality is related to our ability to understand the discourse that make up the speech and action of others, I need to actively get interested and appropriate the other”, added Ana.

As an example, the researcher used her own technical training working experience in the intercultural context. Over the past seven years, Ana has been involved in training of 189 indigenous health workers hired by the indigenous health subsystem of the Upper Rio Negro region, northwest of the Brazilian Amazon, Brazil's border with Colombia and Venezuela. This region has an important indigenous movement that organizes the associations into a federation, the Federation of Indigenous Organizations of Rio Negro (FOIRN). Region leaders have occupied representation spaces in instances of social control and health and education management.

Ana says that, from a critical evaluation of the situation of Indigenous Health Agents, mainly of their devaluation and loss of autonomy in health teams, indigenous leaders have demanded from local managers to raise the health education and professionalization levels of IHAs.

The researcher highlighted a fundamental strategy for the training of professionals: “We encourage seeking information from leaders and local knowledgeable people, as part of the body of knowledge that agents need to know, including passing it on to the non-indigenous health workers. We had no claim to teach traditional knowledge, but sought its revaluation as some form of knowledge equal to the biomedical one and relativized knowledge and biomedical categories”.

Ana highlights the importance of international cooperation in technical education. “I believe that experiences of indigenous schools, such as the Tekove Katu in Bolivia, are the ones that will bring new learning”, she said.

Despite constraints, such as lack of teachers available to teach in communities and appropriate teaching materials, the experience was successful: “At the end of the course, their ability to discuss health actions in accordance with the interests and contexts of the communities was very clear”.

After answering questions from the audience and the virtual chat, Ana Lucia made her final remarks: “Even if language is the same and we share common stories, we should never forget the specificities of each region. Sometimes, we tend to minimize what is different to facilitate the process, but times should not be hastened. On the other hand, distant realities can contribute to strategies for our reality or make us think differently about what seems so familiar and routine-like. Interculturality must be a multi-way dialogue forum and in which the processes of transformation (of individuals, lifestyles, knowledge and practices) are welcome. Culture is constantly changing and interculturality is part of this movement”.

RETS next Virtual Seminar is scheduled for July 9 and shall address the role of border health professionals. The third event shall be held on September 17, where the relationship between the Sustainable Development Goals (SDGs) and primary health care-focused technical training shall be discussed.

The video of the Seminar shall be published shortly. Click here to participate in the Debates Forum of this seminar.