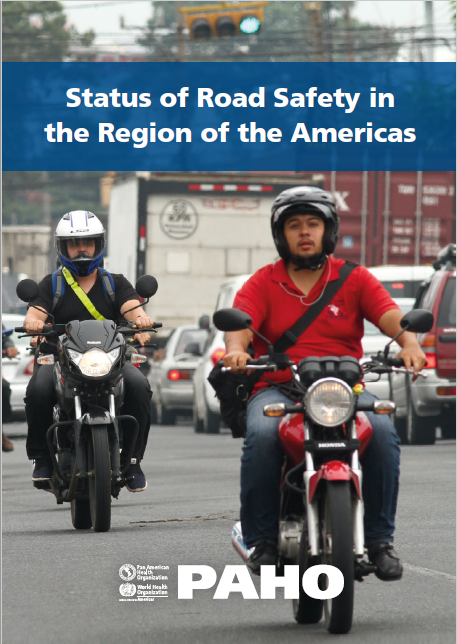 “These findings indicate the need to prioritize the prevention of these injuries with proven interventions that we know work,” said Dr. Carissa F. Etienne, Director of PAHO. “Road traffic injuries not only take the lives of thousands of people each year, but they also leave thousands more with disabilities, emotional and financial distress, and place a heavy burden on health services.”

This report presents the latest data on mortality (2016), legislation (2017), evaluation of roads (2017) and vehicle standards (2018) reported by 30 countries in the Americas. It highlights that while there have been advances in road safety legislation and management, and follow-up care for those affected, the goal of reducing road traffic deaths by half by 2020 will not be achieved.

Motorcyclists, pedestrians and cyclists are the most affected

Almost half of those who die due to road traffic injuries are motorcyclists (23%), pedestrians (22%) and cyclists (3%), who are considered vulnerable road users because they have minimum protection and no alternative but to use unsafe road infrastructure. The percentage of motorcycle victims increased from 20% to 23% between 2013 and 2016, which is likely related to a 23% increase in the number of registered 2 and 3-wheeled vehicles during the same period.

The report analyzes advances in national legislation that address the five key risk factors to prevent road deaths and injuries. These include speeding, drink-driving, and failing to use seatbelts, motorcycle helmets and child restraint systems.

However, no new laws have been enacted on reducing speed limits, a key measure that saves lives, with only five countries ensuring standards that align with best practices (introducing maximum speed limits of 50 kilometers per hour on urban roads).

“The enactment of laws, and their effective enforcement, are key to preventing road traffic deaths. However, this remains a challenge for most countries,” said Eugenia Rodrigues, Regional Advisor on Road Safety at PAHO. Rodrigues also stressed the importance of having road safety agencies, which exist in 29 of 30 countries in the Region, as well as coordination and collaboration between various sectors.

The report also evaluates the status of vehicle safety regulations and road infrastructure and analyzes the progress and challenges towards improving post-crash care.