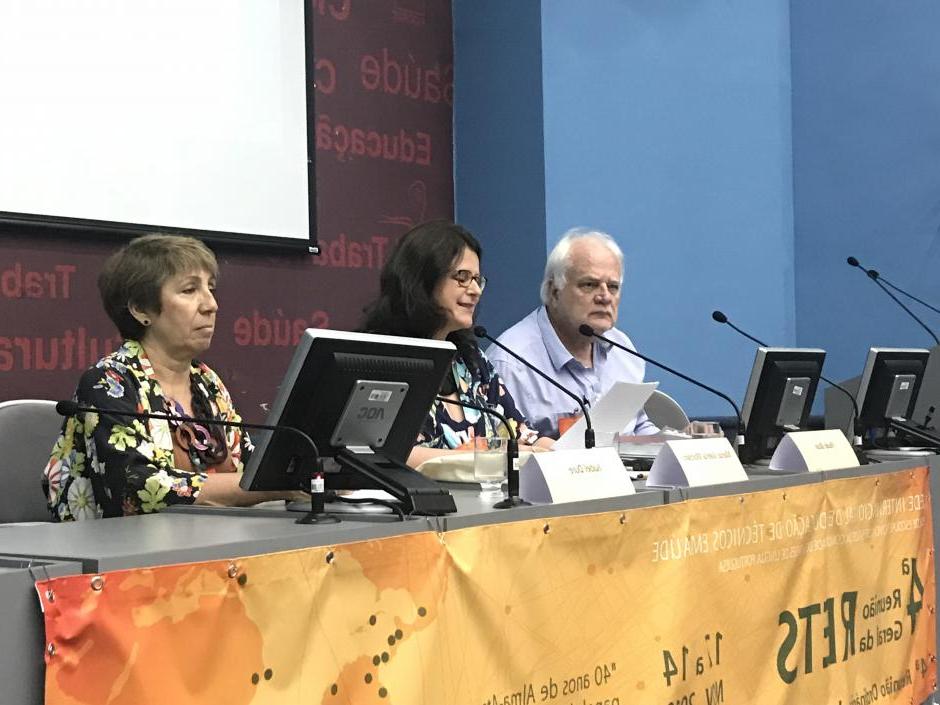 The 40 years of Alma-Ata and the role of health technicians in the implementation of universal health systems was the theme of the opening seminar of the 4th Meeting of the International Network of Health Technicians Education (RETS), held from 12 to 14 November, in Rio de Janeiro, together with the 4th Ordinary Meeting of the Community of Portuguese Speaking Countries (RETS-CPLP) sub-network. The debate was mediated by professor at the Polytechnic School of Health Joaquim Venâncio (EPSJV/Fiocruz) Márcia Valéria Morosini and it has counted on  Paulo Buss, Fiocruz ex-president and current coordinator of Fiocruz's Center for International Relations (Cris), and the Ministry of Health and Social Development of Argentina advisor, Isabel Duré. "It's very difficult to talk about Astana and the current moment without reviewing what Alma-Ata was like. One of the main reversals was that the Astana Declaration assumes that Alma-Ata lives by the power of its document. It was a difficult achievement for Brazil, for the other South American countries that were together there and also for African countries that know the importance of primary care in institutional life, in the life of the people, in the life of the health system", began Buss , proposing to make a historical rescue: "At the heart of Alma Ata's approach there are ideas such as universal accessibility, equity, integration of prevention and treatment, government responsibility for population health and community participation."

In 1978, Buss recalled, WHO member countries, meeting in Alma Ata, in the present Republic of Kazakhstan, established, through a report and subsequently the Alma-Ata Declaration, a set of principles to protect and promote the health of all the people, evidencing the primary health attention like a guiding of an integrated health system. The International Conference on Primary Health Care was attended by about 3,000 people from more than 100 governments and representatives of 67 United Nations agencies and non-governmental organizations. "The Alma-Ata Declaration brings health as a state of complete physical, mental and social well-being, not simply as the absence of disease. Health is seen as a fundamental human right and the conception of the highest possible level of health is the most important global social goal, whose realization requires action from many other social and economic sectors beyond the health sector. So, the document builds the issue of social determinants, which comes from the 19th century, but with a contemporary concept", he said. Another question raised by Buss is that the document draws attention to the great inequality that existed in the state of health of peoples between developed and developing countries: "This was seen as politically, socially and economically unacceptable." The Declaration also brings primary health care as essential care in health, "based on practical methods and technology, scientifically well-founded and socially acceptable, placed within the universal reach of individuals, through their participation and at a cost that the community could maintain at each stage of their development, the spirit of self-confidence and self-determination of peoples", he said, explaining: "That is, it places primary attention as an integral part of the system and the main focus of the community's overall social and economic development. In the document, primary care represents the first level of contact of the current health system, so we say that care is taken as close as possible to the place where people live and work, and it is the first element of a continuous process health care".

The coordinator of CRIS spoke of the highlight that Alma-Ata gave to the question of human resources and the work that would be equivalent to the community health agents at the time. According to him, the assignments of this professional were based on the experience of the Feldsher, who were mid-level technicians from the Soviet Union, and the 'Barefoot Doctors' from China. "Feldsher was a group of nonphysicians trained for primary care and also to function as agents within more sophisticated spaces of the health system. The 'barefoot doctors' of China were truly for the rural area, mainly. A great idea that later extended to community agents in other countries of the world", he said.

The issue of country cooperation has also been at the heart of the document discussion, saying that the use of global resources needs to be better applied, of which a considerable share would be spent on arms and military conflicts. "Unfortunately, since 1978, spending on arms and military conflicts has only increased, it means that wars are getting more and more sophisticated. Alma-Ata calls attention to these military resources to be directed to social issues", he said.

On Alma-Ata developments, Buss emphasized that in 1979 the World Health Assembly endorsed the Declaration. Two years later, the United Nations General Assembly (UNGA) adopted a special resolution that encouraged all member states to implement a comprehensive health strategy for all by the year 2000 under the coordination of WHO. "Despite falling short of many aspirations, there is no doubt that the Alma-Ata Conference and the declaration on primary care have become a perennial reference in the global health community’, he said.

Understanding about PHC and its applications over the years has undergone several interpretations and approaches - selective PHC, primary care, comprehensive Alma-Ata PHC and PHC with a focus on Health and Human Rights. The Selective PHC, according to Buss, brings together a set of health service activities aimed at the poor population, while primary care refers exclusively to the doorway of the health system in a place of care. "The third conception is the comprehensive PHC of Alma-Ata, which is a strategy for organizing the attention system from primary care, for society to promote health, and finally the focus on health and human rights that emphasizes understanding health as a human right and the need to address broader social and political determinants of health”.

Four decades after Alma-Ata, the Astana Conference in Kazakhstan took place on October 25-26, 2018, with about 2,000 participants. The goal, according to Buss, was a new commitment to PHC consistent with the current global historical moment and Agenda 2030 and its sustainable development goals. The main output of the Conference was the Astana Declaration. "By appropriating all the values, principles, and the mission of primary care, it is a document of value. The attack on primary care does not come from Astana, it does not come from the WHO, the attack on primary care comes from neoliberal governments that want the privatization of the entire health system”, he defended.

According to Buss, the Astana Declaration brings the reading of selective PHC as Universal Health Coverage, whose proposal is to increase access to health services, reduce the financial difficulties of people who use these services and pay from their own pocket, besides maintaining the financial sustainability of pension systems. "The Universal Coverage has a central role in the financial coverage, with responsibility for individuals and the lack of responsibility of the State, focusing on access to health insurance, with packages restricted to the capacity to pay, which in no way guarantees access to services according to health needs, whether in the individual dimension, and even less in the collective dimension", he concluded.

The unfinished agenda of training and work of health technicians According to the Argentinean Isabel Duré, the Astana Declaration at the same time rescues the Alma-Ata principles and the existence of human resources problems in health. "We can not think of human resources health policies if we do not have a national health system with clear funding policies. From the Alma-Ata Declaration and the Millennium Development Goals, some global and regional human resource policy frameworks have emerged", she said, noting that Alma-Ata Declaration focused on human resources, including physicians, nurses, midwives, auxiliaries and community workers, as well as people who practice traditional medicine, with training in social and technical issues to act as a multidisciplinary health team and to meet the needs of the community.

Based on the WHO report on health workforce investment, Isabel emphasized that the health sector has generated many jobs over the last ten years. However, the reality is now different: "At this moment there is a expectation of a  deficit of 18 million jobs in the world." According to her, the report proposes the creation of 40 million jobs in the health sector by 2030. From the document, Isabel drew attention to the gender perspective in the workforce. "The 70% of all health jobs in the world are female jobs, and those who will be created will also be taken by women’, she said. However, women are not yet recognized. "The pay gap between men and women is significant", she continued. She mentioned a recent study in Argentina, whereby gender gaps of 19% were identified among higher education professionals and 15% among technicians. "Half of women's work is in the role of unpaid caregivers. However, the good news is that this role of caregiver is becoming standardized with public policy proposals. There is a call for these women to be recognized and professionalized”, she said.

Regarding the level of education of technicians in the world, Isabel affirmed that there are technical professions of superior level, in the majority, and others of midle level. "Top-level technical training happens in most, but not all, countries. Therefore, more and more we have to look at the occupation and less at the level of training. We must stop dividing hierarchically the processes of traditional professionalization and look at the professionalization process of each one. It seems to me that this is what will help us generate visibility for the category", she said, explaining that there is still the idea that technicians are those who have more training than auxiliaries, but less than a professional: "If we want to understand this unfinished agenda, we need to understand that the history of technical training in each of our countries is crossed by different brands. Health workers around the world are seeking legitimacy and this is a process of struggle, tension”.

Regarding the challenges, Isabel stressed that it is necessary to think about the continuous education of this technical worker, as well as new jobs, in ways of including them in interprofessional education and in new ways of working relationship within the health teams. "We have groups with different professionals, older, younger, immigrants. Our workers have to be prepared for this interculturality", she concluded. As the table mediator, Márcia Valéria Morosini addressed the Brazilian context in which, according to her, a scenario of fragilization of primary health care is configured by the revision of the National Policy of Basic Attention. "What we have seen in the state of Rio de Janeiro is the dismissal of workers, the closing of teams, restoring obstacles to access and universal health care", she said, adding that there are challenges that can be overcome in a network: "We can move forward in the collective work, even if we have different conditions, even with the unequal countries that we are, but the Network has never been so necessary as now to face the current international and national context in which hegemony of the idea of health as a commodity.

Márcia Valéria also explained that the private health sector has for some time discovered primary care as a space or as a way of recomposing their lucrative losses. "It is no coincidence that cheaper simplified health plans have been proposed in the countries, and here too, so that they are accessible as an option to those who have the minimum resources to buy health, and thus, in our country, will leaving the SUS for the loss of quality of attention and for the difficulty of access", she lamented.