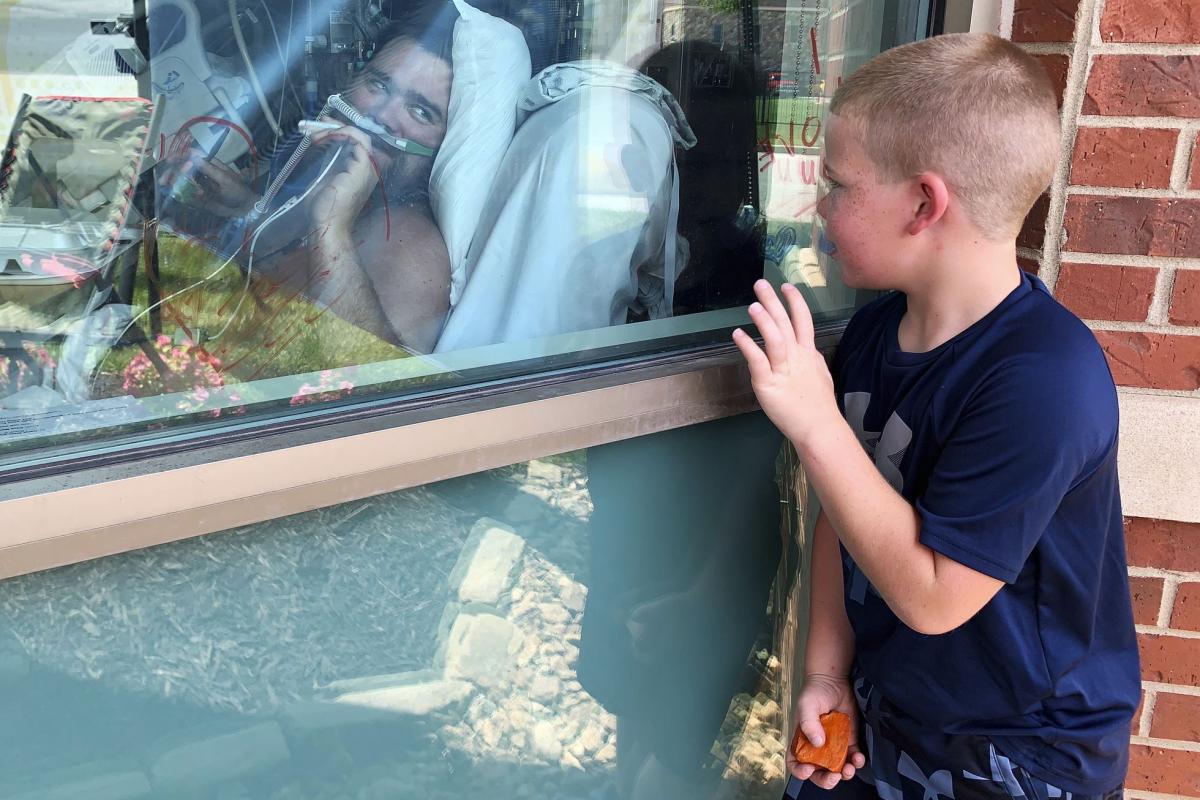 A child looks at his father admitted for covid in a hospital in Missouri, USA. SARAH BLAKE MORGAN / AP

Two studies now clarify why some people contracted coronavirus infection without experiencing problems while others fell ill to death. One of the studies points out that nearly 20% of deaths from covid-19 are due to the fact that patients produce a type of immune system protein that, far from protecting them against the virus, exacerbates its effects.

Almost a year ago, an international consortium of scientists and doctors warned that 10% of patients produced autoantibodies, immune system proteins that inexplicably turn against the patient’s body. These defective antibodies attack type 1 interferons, a set of fundamental molecules because, soon after the virus enters the body, they are responsible for intercepting it, setting off a general alarm in all tissues so that the cells activate their protective machinery. . Blocking this molecule is enough to make the infection worse and put the patient’s life at risk.

These new studies carried out by the same consortium are much more complete, as they have already analyzed more than 3,500 patients in critical condition because of covid-19. The results were published this Thursday in Science Immunology and show that nearly 14% of critically ill patients had these defective antibodies.

The work also shows that these autoantibodies are much more common in older people. About 6% of people over 80 years old have these autoantibodies present in the body before the virus enters, while only 0.18% of people between 18 and 69 years old develop them, according to the study, which for this analysis , examined samples from nearly 35,000 people. The presence of these autoantibodies is also greater in patients with some previous immunological diseases, such as thymoma, which affects the thymus, a kind of barracks where members of the immune system are trained to differentiate which molecules are theirs and should not be attacked and which belong to pathogens and have to be annihilated. “It is possible that part of the reinfections we see in vaccinated people are due to these autoantibodies,” explains Carlos Rodríguez-Gallego, an immunologist at the University Hospital of Gran Canaria Doctor Negrín and co-author of the study.

“It is logical to think that the vaccine also protects people who have these autoantibodies. These new data should be used to carefully select at-risk groups that could benefit from a third dose of the vaccine,” adds Rodríguez-Gallego. The doctor points out that it is now possible to carry out a special test to detect these molecules and, therefore, to know if an infected person is at greater risk of suffering severely from covid-19. It also points out two treatment possibilities: in the first days of infection, when there are still almost no symptoms, interferon can be used. If the disease is already advanced, it would be necessary to resort to plasmapheresis, a blood filtration to eliminate malignant antibodies and other inflammatory molecules.

The same consortium clarifies in a second study one of the crucial reasons that covid-19 is being more lethal for men. It is a mutation in the TLR7 gene that predisposes people to be seriously ill from covid-19. This gene is on the X chromosome, which makes men much more vulnerable as they only have one copy of this chromosome while women carry two, significantly reducing the risk. The study evaluates that this hereditary defect can explain almost 2% of cases of severe pneumonia caused by covid-19 in children under 60 years of age. “This is one of the few pieces of evidence that really explains why a subset of patients gets worse, and this represents little hope for them,” acknowledges Manel Juan, an immunologist at Hospital Clínic in Barcelona. The doctor reminds us that one of the things we need to find out now is whether these two risk factors are also behind part of reinfections in fully vaccinated people.

At the beginning of the pandemic no one knew what the risk factors for covid were. At that point the Human Genetics Consortium (HGE) was created to detect genetic variants that could influence the prognosis of those infected. In September last year, the project led by Jean Laurent Casanova, a researcher at the French National Institute for Health and Medical Research and Rockefeller University in the USA, and Helen Su, of the Institute of Allergy and Infectious Diseases in the same country, identified both the autoantibody problem and eight other genetic variants affecting type one interferons that account for 3.5% of cases of severe covid. These variants are much more common in men than in women. These small pieces of the puzzle go some way to explaining why men are significantly more likely to suffer complications and die from this cause than women.

There is a direct connection between biological sex and the functioning of the immune system, a key point, since in most cases it is not the virus that kills the patient but the defective reaction of his or her immune system. After the virus enters the body, some patients produce a large number of inflammatory molecules that aggravate the pneumonia. This is the dreaded cytokine storm. The rampant production of these molecules is much more common in men than in women, especially at older ages. In addition, older men generate fewer T-lymphocytes capable of identifying and destroying infected cells. One of the main risk factors for covid is age, partly because the immune system is aging and functions less and less well. But this immune senescence tends to come earlier in men than in women, another factor that explains part of the gender difference seen during the pandemic.

At the genetic level, a man differs from a woman in that women have two copies of the X chromosome and men have only one. This is a life insurance for females, as this chromosome contains several key genes for the proper functioning of the immune system. Having two versions of this chromosome means that the healthy copy can counteract the effects of the defective copy if it exists, something simply impossible when only one version is available.