Home » News » Ernesto Samper: UNASUR considers health as one of the axis for social inclusion in the region
Published in: 10/09/2014 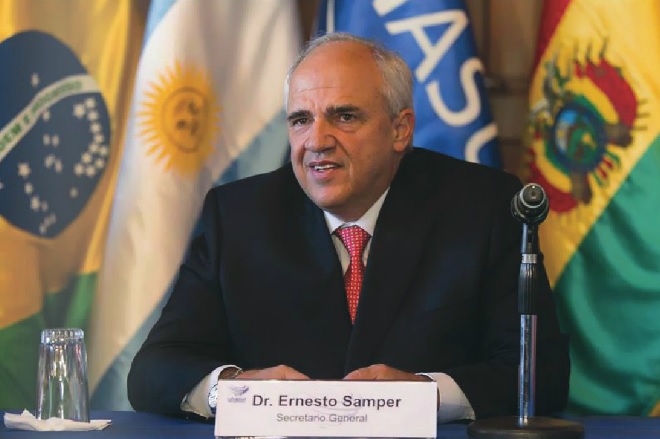 ISAGS exclusively interviewed UNASUR's new secretary general, Ernesto Samper. Samper highlighted that health as a right is not a mere philosophical postulate, but something that needs to be consolidated into actions.

UNASUR has completed six years of existence in 2014 and it presents relevant progresses in the South American integration. As for your management, you have highlighted the importance of having the Bloc working on a new social agenda focused on the reduction of inequalities, of acting on the economic issue for the promotion of energetic integration and of having greater investments in science and technology, besides retaking the political protagonist role in the region, aiming at the strengthening of the South American vocation as a space of peace in the world. What is the importance of Health in this context?

Health plays a fundamental role for the purpose of social inclusion as an articulator for the new Social Agenda. Health is a right. In the past few years, we have achieved fundamental progresses in the region, such as the reduction of poverty and the objective rates of regional health, the child mortality rate and the access to basic health services. Nonetheless, the deep inequality in the income distribution obstructs the access to health for some vast parts of the population. There are still those Latin American loopholes with regard to social equity, such as the countryside-city loophole, gender inequality or the discrimination of ethnic minorities, which keep restricting the right to health to extended parcels of the populations in South America.

Considering the purpose of reducing inequities, the South American Health Council, since its constitution, has had a Technical Group on Universal Health Systems, which states for health as a universal, integral and equal right; this view differs from that of universal coverage defended by the WHO and the World Bank, for example. How should UNASUR be positioned towards those global debates?

The philosophical concept of health as a fundamental right should keep leading the reflexions on the issue in South America. Nevertheless, we must understand that health, as a right, is not a mere philosophical postulate. We must develop prevention programs, boost the protagonist role of family doctors, empower rural medical centres, and link this population to the healthcare systems of different levels of care. The inclusion we aim to reach will not leave any person on the outside of health systems due to economic conditions.