Home » News » RETS participates in the tributes for the 75th anniversary of the School of Health "Dr. Ramón Carrillo"
Published in: 12/11/2021

The School of Health "Dr. Ramón Carrillo" (ESS) celebrated its 75th anniversary and, as a closing event, held a virtual lecture entitled "The formation of health professionals in America; a network strategy", by Carlos Eduardo C. Batistella, coordinator of International Cooperation of the Escola Politécnica de Saúde Joaquim Venâncio of the Oswaldo Cruz Foundation (EPSJV) in Brazil, one of the most important science and technology institutions in Latin America.

The meeting was attended by the rector of the Universidad Nacional del Litoral, Enrique Mammarella, the dean of the Faculty of Biochemistry and Biological Sciences (FBCB), Adriana Ortolani, and the ESS director, Germán Boero. Also present were provincial and local authorities, representatives from professional associations, authorities from hospitals, sanatoriums, and clinics in the city and region, representatives from intermediary institutions and entities related to the health area, graduates, professors, researchers, students, non-teaching staff, and the general public.

In the words that preceded the beginning of the lecture, the director underlined: "Throughout these 75 years, what distinguishes the School of Health is its mission to academically train professionals of excellence and accompany the consolidation of health teams. We are convinced that public health is collective action: from the State and civil society, which aims to protect and improve people's living conditions, well-being, and health," Boero emphasized.

As for the type of training that is provided, he stressed: "ESS' academic offer is multiple and meets the demand for training professionals in the different health disciplines, articulating with other academic units to form transdisciplinary teams in a work whose axis is intersectionality as a strategy for action".

For her part, the dean valued the joint work of the last 31 years and the synergy achieved in this process: "The logic of construction of each of the institutions has allowed the development of different actions that today are consolidated and have transcended in the different substantive functions that our university has: in academia, in research, in the strong extension and linking and transfer actions" and added: "We are willing to rethink our strategic institutional missions and project ourselves as a faculty and a school in a proud university. century-old history, which bets on public education as a human and universal right".

For his part, the Rector of the UNL stressed: "I want to dwell on two points that make the ESS different: one is the social commitment, so I want to congratulate the entire educational community because they are an example of work. And another is the territorial vocation, because the UNL is not a city University, but a regional one, we must attend a lot of places, and the predisposition that they have from the direction of the ESS to the last teacher, non-teaching, student and graduate to be in the territory, to collaborate and understand the responsibility we have as an institution. I would also like to congratulate them on the 10th anniversary of the Ramón Carrillo Open Chair, because working on public health policy is very important for the University, but doing it democratically and bringing in outside voices to seek interdisciplinarity is a permanent-growth and enrichment", he concluded. 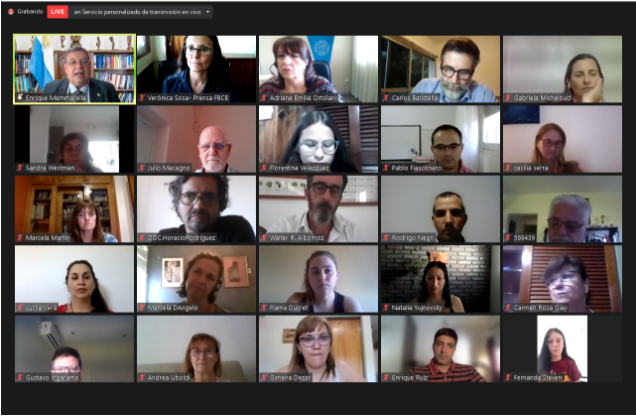 In his dissertation (PDF), Batistella presented the institution he comes from, exposed the several actions he takes in the formation of health professionals, and developed the concept of networking in the post-pandemic context, with a marked intention on primary care and intersectoriality.

As part of the celebration of this anniversary, the rector of the FBCB handed a commemorative plaque to the director Germán Boero to highlight the trajectory of the School and its community: "We celebrate this date that reaffirms the mission of this institution to form professionals with an integral vision of health and committed to the needs of society".