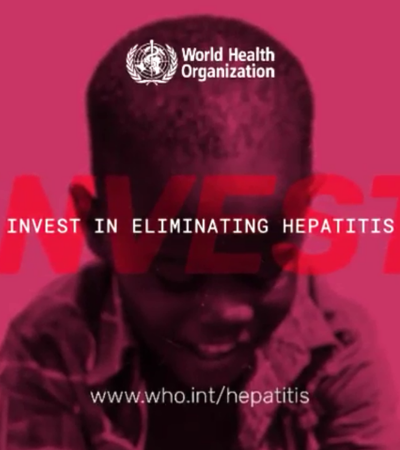 The World Health Organization urges countries to take advantage of reductions in the costs of diagnosis and treatment of viral hepatitis and to increase investments to eliminate this disease. A new WHO study, published last Friday (July 26) in Lancet Global Health, shows that $ 6 billion a year in 67 low- and middle-income countries would prevent 4.5 million premature deaths by 2030 - and more than 26 million beyond that date. Just over $ 58 billion is needed so that viral hepatitis is no longer a threat to public health in these countries over the next 11 years. This means reducing the number of new infections by 90% and deaths by 65%.

"Today, 80% of people living with hepatitis cannot access the services they need to prevent, diagnose and treat the disease," said WHO Director-General Tedros Adhanom Ghebreyesus. As part of The World Day against Hepatitis, held on July 28, Tedros talks about the Organization's wish: “On this date, we call for bold political leadership, with corresponding investments. We urge all countries to integrate hepatitis services into benefit packages as part of their journey towards universal health coverage ".

By investing in diagnostic tests and drugs to treat hepatitis B and C at this time, countries can save lives and reduce costs related to the prolonged treatment of cirrhosis and liver cancer that result from untreated hepatitis. Some countries are already in action. The government of India, for example, has announced it will offer free diagnostic tests and treatment for hepatitis B and C as part of its universal health coverage plan. This was facilitated by reducing drug prices. In the country, cure of hepatitis C costs less than $ 40 and a year of hepatitis B treatment costs less than $ 30. At these prices, cure of hepatitis B will result in health cost savings within three years.

The government of Pakistan has also been able to offer curative treatment for hepatitis C at equally low prices. Providing this treatment to all people currently diagnosed with hepatitis C can also reduce internal healthcare costs within three years. Meanwhile, the country faces one of the highest annual rates of hepatitis C virus infection and is launching a new infection control and injection safety plan to stop transmission.

People do not have access to prevention, diagnosis and treatment

For most of the 325 million hepatitis B and C infected people, access to diagnosis and treatment remains out of reach. Of the 257 million people living with hepatitis B:

Of the 71 million people living with chronic hepatitis C infection:

On World Hepatitis Day 2019, WHO calls on all countries to invest in the elimination of hepatitis through increased budgeting and financing of elimination services within their universal health plans. While there has been widespread support among Member States in adopting the hepatitis elimination strategy, with 124 out of 194 countries developing actions, more than 40% of country plans lack dedicated budget lines to support elimination efforts.

There are five types of these infections - A, B, C, D and E. More than 95% of deaths are caused by chronic hepatitis B and C infections, while hepatitis A and E rarely cause fatal diseases. Hepatitis D is an additional infection that occurs in people living with hepatitis B.

In 2017, the SDG Health Price Tag study estimated the investments needed to meet the 16 health-related goals of the Sustainable Development Goals in 67 low- and middle-income countries representing 75% of the world's population. This study did not include costs for hepatitis. The new research, published this month, is based on the same scenarios and models for estimating spending to achieve global disease elimination goals. The Organization has also launched two virtual calculators designed to support decision makers in assessing the cost-effectiveness of their viral hepatitis treatment programs.