Home » News » EPSJV promotes a workshop on mental health and the training of health technicians.
Published in: 09/16/2022
Julia Neves/EPSJV 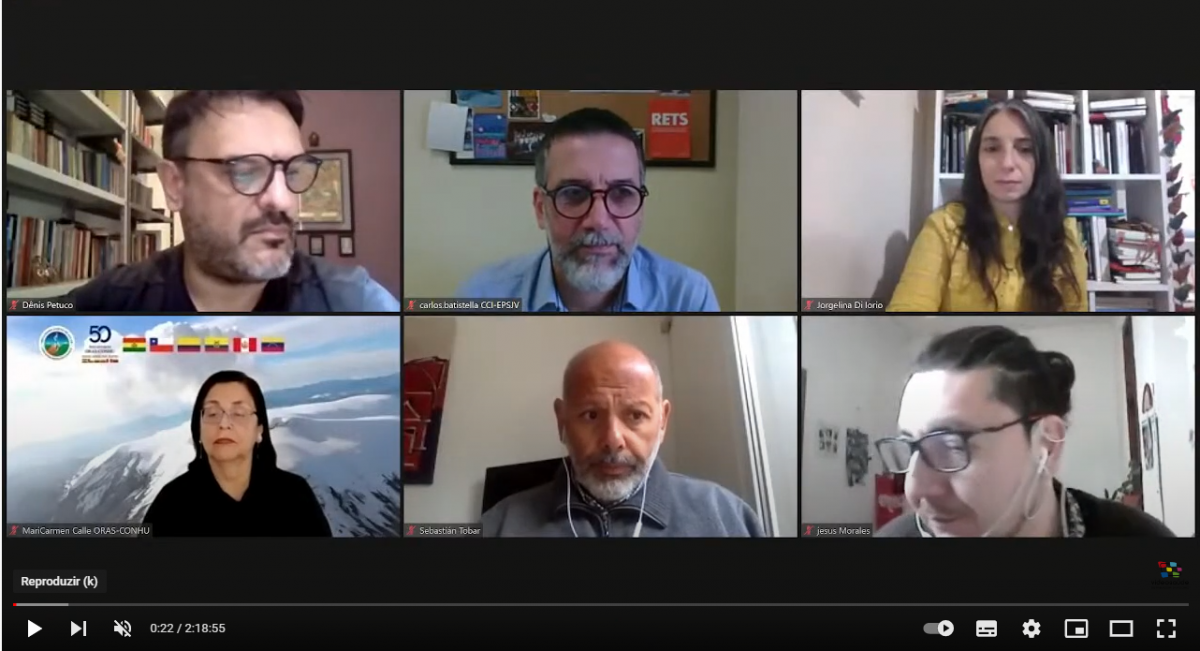 The Joaquim Venâncio Polytechnic School of Health (EPSJV/Fiocruz) held, on September 13, the workshop "Mental health and the training of health technicians" as part of the 2nd cycle of workshops "The training and work of health technicians in the post-Covid-19 world". The initiative is carried out in collaboration with the International Network for the Training of Health Technicians (RETS), the Ibero-American Network for the Training of Health Technicians (RIETS) and the Network of Health Technical Schools of the Community of Portuguese-Speaking Countries (RETS-CPLP). The event is also supported by the International Relations Center (Cris/Fiocruz) and VideoSaúde Distribuidora de Fiocruz.

At the opening of the event, Sebastião Tobar, advisor to the Fiocruz Center for International Health Relations (Cris/Fiocruz), highlighted that mental health problems are an important cause of mortality in the Americas region, but are still ignored in the public health field. According to him, healthcare professionals were greatly affected during the Covid-19 pandemic, mainly due to emotional issues. "During the pandemic, healthcare workers were overwhelmed and the lack of information about the disease at the beginning generated additional stress, causing these workers to have to learn on the fly and readapt in an agile way to provide responses," he pointed out.

In this scenario, Carlos Eduardo Batistella, coordinator of International Cooperation of EPSJV, stressed that it is necessary to bring mental health to the discussion agenda, asking some questions: "To what extent has the pandemic aggravated the mental health problems of the population? What policies and strategies have governments prioritized? How to address contemporary psychic suffering without incurring in the growing medicalization of society? What is the role of health technicians in meeting mental health needs? These were some of the questions that somehow moved us and to which we tried to give an answer".

In her speech, María del Carmen Calle Dávila, Executive Secretary of the Andean Health Organization (Oras-Conhu) of Peru, pointed out some of the psychological impacts that affected healthcare professionals during the pandemic. According to her, what caused stress and mental exhaustion, in addition to more serious disorders, were the uncertainties and restricted biosecurity measures; the greater exposure and risk of being infected; the fear of contaminating people, especially family members; as well as the greater demands in the work environment that generated insecurity. "At first, it generates restlessness and nervousness. Next, a sense of fear, blockage and flight, leading to exhaustion and discouragement. And finally, depression, anxiety, suicidal thoughts and syndromes, such as Burnout, i.e., professional burnout," she said.

On what strategies should be used to protect the mental health of these workers, María del Carmen said that actions are needed at the individual and organizational level to support people with high levels of stress and emotional suffering. "At the individual level, we need to orient people on basic needs, such as rest breaks during the day and contact with support networks. At the organizational level, we must progressively build a work environment that protects workers' mental health," she said.

Mental health and the training of health technicians

Continuing the event, EPSJV's professor-researcher, Dênis Petuco, gathered some contributions about the mental health training of health workers in the post-pandemic context. In his view, when the mental health field thinks about health care for the population that uses alcohol and other drugs, it is very strongly linked to housing, work, and income policies. "In this pandemic context, especially in the Americas region, what we see is the sharpening of contradictions and social inequalities. Unemployment, for example, is around 10%, with variations from one country to another," he pointed out. And he concluded: "One of the things that has most called my attention, in this context of mental health training, is the importance of decolonial thinking in the construction of training processes, of practices beyond the western or even non-Western thinking to think about the care directed to these populations".

For Jorgelina Diorio, a professor from the University of Buenos Aires, Argentina, there is no mental health without social justice, just as there is no integral health without mental health, without the expansion of rights and without access to social, economic, political, and cultural rights. She also cited some challenges for mental health training. "We need to understand mental health not only as the absence of pathology, but also as the promotion of rights. We need effective models of risk and harm reduction as we think about proposals centered on the participation of local communities," she pointed out.

The professor at the Universidad Central de Chile, Jesus Morales Romero, began his presentation by highlighting that there is no health without mental health. "We cannot think about the approach to health separating the subject from attention in different areas. We understand the importance that mental health also has for public health," he said. For Romero, it is necessary to put into the debate another vision about life and coexistence in community and to rethink society as productive work. "We need to recognize the violence of the economic and social system, as well as ecodependence and environmental sustainability that must be part of any political struggle to show the link between crisis and malaise, that is, mental illness is an erosive process that could be avoided with social and political intervention," he finished.