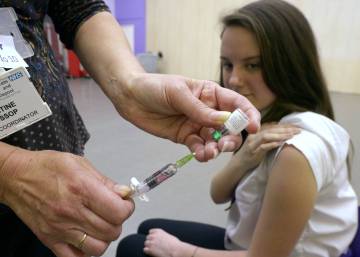 The World Health Organization has warned of the "dramatic rise" of measles in Europe, an infectious disease preventable by vaccines that can be fatal and cause serious sequelae, on the last august 29. Although the trend is global, Europe is especially concerned about WHO for the decline that the continent has suffered in the control of the disease. "We are going in the wrong direction," said Kate O'Brien, director of the Organization's Immunization and Immunization Department. Although most of the increase is due to the lack of health systems in the countries of the East, the organization warns of the impact of anti-vaccine theses and fake news in Western Europe.

For Tedros Adhanom Ghebreyesus, general director of the WHO, after the rise of the disease there is partly false news about vaccines that are spread through social networks. "They are as contagious and dangerous as the diseases that help spread", he lamented. Four countries, the United Kingdom, Greece, Albania and the Czech Republic, lost in 2018 the status of "measles-free country", which means that the virus has once again circulated autochthonously. This is the first time this has happened since the WHO established this data review process in 2012. The organization recorded 89,994 measles cases in 48 European countries in the first half of 2019, more than double the same period last year and more than in all of 2018.
In the first six months of the year, 37 people have died from measles in the 53 countries that WHO includes in its European office, a figure that rose to 73 in 2018. A total of 35 countries maintained the status of "country at the end of 2018" free of disease. They are two less than the previous year because although four states have lost it, two have recovered it (Switzerland and Austria). Among the countries in which the disease remains endemic are Germany, France and Italy. The United Kingdom recorded 953 cases in 2018 and 489 in the first six months of this year. In Greece, these figures amount to 2,193 and 28 cases; to 1,466 and 475 in Albania; and at 217 and 569 in the Czech Republic.

"They are not countries with particularly weak [health] systems, which is a wake-up call. It is not enough to achieve high national coverage, it must be done in each community and in each family", O'Brien warned. The number of cases registered across the planet tripled between January 1 and July 31, 2019, with 364,808 patients, compared to 129,239 last year in the same period. The most numerous were registered in the Democratic Republic of the Congo, Madagascar and Ukraine. The United States has suffered in the last year the largest outbreak in a quarter of a century.

There is no treatment against measles after infection and assistance is focused on alleviating the symptoms (high fever, severe cough, rash, among others). According to data from the US public health agency, one in five people who get the virus will be hospitalized, one in 20 children will suffer from pneumonia and between one and three in a thousand cases will die and suffer irreversible neurological sequelae. The disease, however, is preventable with two doses of the vaccine. The WHO estimates in more than 20 million the number of deaths avoided in the world between 2000 and 2016 thanks to vaccination.

Spain does not escape the increase in the incidence of measles in Europe. If it was almost eradicated a decade ago, in recent years the disease has caused “sporadic outbreaks, always related to some case imported from a country where the disease is endemic”, explains Magda Campins, head of Preventive Medicine and Epidemiology at Vall d Hospital 'Hebron from Barcelona. The last two of greater relevance have occurred in the first half of the year in Catalonia and the Community of Madrid - with cases also in Guadalajara -, with almost 300 patients in total.

“These outbreaks occur because poorly immunized population pockets persist in Spain. Since measles virus is very contagious, anyone who comes into contact with an imported case will be infected and the virus will start circulating”, says Campins. This specialist emphasizes that "the risk is that these stock exchanges grow and hence the need to never lower their guard with vaccination policies and the danger of anti-vaccine ideas".

The largest of these groups in Spain is that of adults who were born in the seventies, when the circulation of the virus decreased - which stopped immunizing all those who had the disease - but vaccination campaigns did not yet reach The entire population. Another, which according to Campins affects 20% of patients in Spain, is that of children under one year of age, to whom it is not yet possible to vaccinate. "Their safety depends on the protection that gives them that the rest of the population is vaccinated", in the so-called herd protection, concludes Campins.