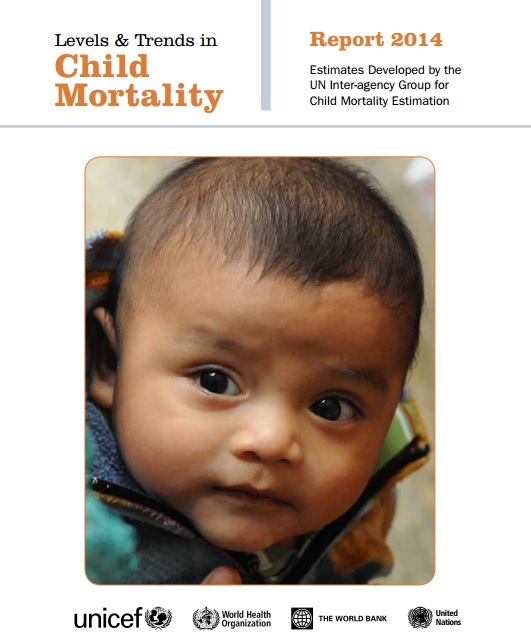 New data released by the United Nations show that under-five mortality rates have dropped by 49% between 1990 and 2013. The average annual reduction has accelerated – in some countries it has even tripled – but overall progress is still short of meeting the global target of a two-thirds decrease in under-five mortality by 2015. New estimates in "Levels and Trends in Child Mortality 2014" show that in 2013, 6.3 million children under five died from mostly preventable causes, around 200 000 fewer than in 2012, but still equal to nearly 17 000 child deaths each day.

“There has been dramatic and accelerating progress in reducing mortality among children, and the data prove that success is possible even for poorly resourced countries,” said Mickey Chopra, head UNICEF’s of global health programmes. “There is now a gathering momentum from countries in every part of the world to make sure proven, cost-effective interventions are applied where they will save the most lives.”

In 2013, 2.8 million babies died within the first month of life, which represents about 44% of all under-five deaths. About two-thirds of these deaths occurred in just 10 countries. While the number of neo-natal deaths have declined, progress has been slower than for the overall under-five mortality rate.

In June this year, WHO, UNICEF and partners issued the first-ever global plan to end preventable newborn deaths and stillbirths by 2035. The Every Newborn Action Plan calls for all countries to take steps to provide basic, cost-effective health services – in particular around the time of childbirth, as well as for small and sick babies – and to improve the quality of care.

“The global community is poised to end preventable maternal, newborn and child deaths within a generation,” said Dr Flavia Bustreo, Assistant Director General at WHO. “We know what to do and we know how to do it. The challenge now is to move from plan to action – we are pleased to see countries like India beginning to lead the way.”

Among the report’s other major findings:

“For continued progress, it is essential to invest more in health systems that deliver high-quality, affordable services to all women and children who need them,” said Olusoji Adeyi, Director of Health, Nutrition and Population at the World Bank Group.

The report notes that major improvements in child survival are in part due to affordable, evidence-based interventions against the leading infectious diseases, such as immunization, insecticide-treated mosquito nets, rehydration treatment for diarrhoea, nutritional supplements and therapeutic foods. The major causes of neonatal mortality – pre-term birth complications (35%) or problems during delivery or birth (24%) – require health interventions closely linked with protecting maternal health.

Global estimates of child mortality are challenging to produce because many countries lack complete systems to track vital records. The estimates released today are largely based on statistical models and data from a variety of sources, including household surveys and censuses. All the numbers cited here fall within a statistical confidence range. For example, the estimated global number of 6.3 million deaths in 2013 falls within the statistical confidence range of 6.1 to 6.7.

The Inter-Agency Group for Child Mortality Estimation or IGME was formed in 2004 to share data on child mortality, harmonise estimates within the UN system, improve methods for child mortality estimation report on progress towards the Millennium Development Goals and enhance country capacity to produce timely and properly assessed estimates of child mortality. IGME is led by UNICEF and includes the World Health Organization, the World Bank Group and the United Nations Population Division of the Department of Economic and Social Affairs.