Home » News » Opening Conference of the Workshop "Border Health Policies in UNASUR" gathers countries of the Bloc and Sub-Regional Organisms
Published in: 11/03/2015
Isags 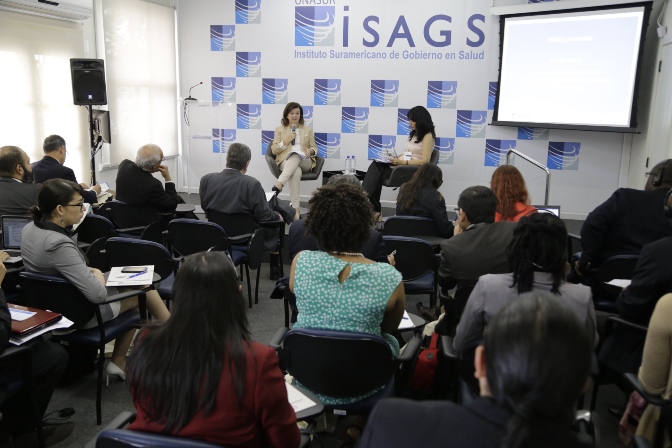 The experience of the European Union with cross-border health care was the subject of the opening conference of the workshop “Border health policies in UNASUR”, organized by ISAGS, from October 27 to 29, in Rio de Janeiro (Brazil). The speech was broadcasted live and was delivered by the expert from European Commission, Maria Iglesia Gomez. Delegations from the 12 countries of the Bloc, besides representatives from sub-regional organisms - CARICOM, ACTO, ORAS-CONHU and MERCOSUR – participated.

During the first part of her presentation, the head of the Unit for Health Care Systems of the Directorate General for Health of the European Commission, Maria Iglesia-Gomez, lectured about the multicultural context of the European borders and pointed out some difficulties in common with the South American borders. According to her, the 500 million people in the borders of the 28 countries of the European continent, with approximatively 24 languages, also face problems with regard to the high cost of medicines and specialized treatment, as well as the lack of qualified professionals in remote areas.

Within this context, Maria Iglesia mentioned that cooperation among countries is a factor of growth and efficiency for the consolidation of the health systems, and remarked that the methodology adopted by the European Commission concerning health care to member states of the bloc may be of interest to the Americas. “Bordering communities are also generally development experimentations, with cultural, economic and social richness [...] it is important to share solutions, good practices and lessons learned from elements that can be implemented in other border zones", she observed.

The European directive for cross-border health care is established upon three lines of action: the legal support to European patients, in order to enable the choice of where to receive health care; the guarantee of choice of insurer and of reimbursement without any discriminating conditions, and the promotion of cooperation between member states and health professionals. One of its goals is to ensure that patients have access to specialized and high-cost treatment, with information regarding their rights in a transparent way.

According to the expert, the work of the European Commission basically consists of developing indicators that enable the assessment of health systems performances at the national level, and then providing this information to each Member State, so that they are able to evaluate their own systems’ quality, under the perspective of efficiency and accessibility to the population. “Member states have their own health systems and there is no coordination among them”, she explained.

With regard to the priorities of UNASUR’s health agenda, the expert expressed the commitment of the European Commission to seek means to ensure universal access to health, as well as reduce social inequalities in border areas and integrate health policies with actions directed at the environment, transports and urbanism. “One thing that UNASUR can do is influence global agendas, and this is extremely important […] if the issue of border health is in the global agenda, this is due to the articulation of international organisms”.

After the speech, there was an open debate about the theme of the conference. The debate was moderated by the Executive Secretary of the Andean Health Organization - Hipolito Unanue Convention (ORAS-CONHU), Caroline Chang, and had the participation of internet users, as well as of the present audience, which sent questions and comments.

Among the issues discussed, the debate addressed the implications of internal and external migration flows of patients and of health professionals; the responsibilities on cross-border health care systems; health expenditure and fiscal control in health; access to generic and innovative medicines; investment budget limits; food commerce; medical tourism, etc.

The video with the full presentation of the Conference and with all the discussions held during the debate will soon be available at ISAGS’ YouTube channel.